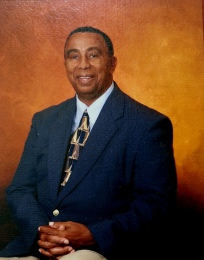 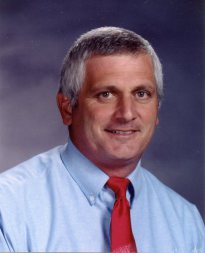 Tom DeMatteis scored the first goal in St. Mark's High School's first soccer game in 1979 and the Spartans won the game. Seven years later, DeMatteis became head coach of St. Mark's and over the next 25 years became the winningest soccer coach in Delaware. DeMatteis' overall record coaching both boys and girls teams was 579 wins, 98 losses with 43 ties. Tom's boys teams won a state record 11 state championships, playing in 15 state championship games and never missing the state tournament. Three of his boys teams went unbeaten, including the 1999 team whose 20 victories are a state record. From 1997 through 2001, the St. Mark's boys did not lose to a Delaware opponent. Eight of his boys teams were ranked nationally. In 1994, DeMatteis began the girls program which, over 14 seasons, captured four state titles and played in four other championship games. From 2001 to 2004, the team put together a 65-game unbeaten streak. Three times, DeMatteis coached both the boys and girls state soccer championship team - the only times that has been done. 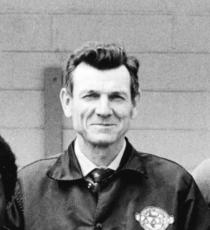 Tom Hickman coached Cape Henlopen High School to Division II track and field championships in 1971, 1972, 1973 and 1975. He helped begin the track program at the newly-consolidated school in 1970 and was head coach from 1971 through 1975.  Hickman remained involved as an assistant coach, including through another three-season state championship run, 1983-85, during which the Vikings won every dual meet. Hickman saw many of the athletes that he would later coach at Cape while organizing Saturday morning track meets for young children in the area near the high school. Tom is noted for awarding medals from the trunk of his car. Hickman excelled in both soccer and track at West Chester State College, before and after his Army service, including at the Battle of the Bulge. Hickman received two purple hearts, two bronze stars and a silver star. Hickman was voted into the Delaware Track and Field Hall of Fame in 1999. In 2012, Hickman, 90, became just the 5th coach recognized in the Ring of Honor at Cape Henlopen's Legends Field. 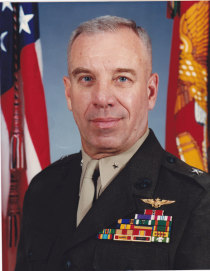 Alvin Huey was an outstanding multi-sport athlete at Milford High School in the 1950s who went on to serve his country with distinction. Huey collected 12 varsity letters at Milford in football, basketball and baseball, where he was recognized as the Buccaneers’ top athlete as a senior in 1956. At the University of Delaware he was a two-year starter in football and won three letters in track, captaining the 1960 Blue Hen track team and setting a University indoor record in the 440-yard dash. At Milford, Huey played offensive end and defensive back, and was selected first team All-State in 1955. In the inaugural Blue-Gold All-Star game in 1956, Huey started at end for the Gold team. In basketball, Huey averaged just under18 points his senior season to earn second team All-State. In track, as a junior, Huey set a state half-mile record of 2:02 when he pulled off a stunning upset of Vic Zwolak (DSMHOF '76). In baseball, Huey played center field and hit with power. After graduating from Delaware in 1960, he enlisted in the U.S. Marine Corps and attended Pensacola Naval Air Station Flight School where he earned his pilot's wings. He also did well on the ground, averaging almost five yards per carry while playing for the Pensacola football team. Huey served two-and-a-half combat tours in Vietnam, flying 398 combat missions. He retired from the Marine Corps in 1990 reaching the rank of Brigadier General. In 2008 Huey was honored with induction into the Milford High School Hall of Fame. 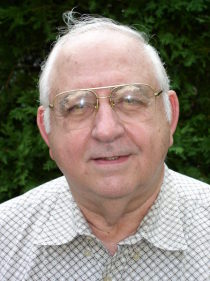 Dario Mas, a native of Cuba and a Delaware resident since 1968, was a dominant racquetball player and advocate for the growth of the sport. Mas won 17 consecutive Delaware state singles titles and was part of six state doubles championship teams. From 1981 to 2004, Mas won more than 300 tournaments across the United States, winning 85 percent of the tournaments that he entered. Mas was ranked among the top ten players in his age bracket in the U.S. for more than 15 years, at times holding the number one spot. Mas was the founder of the Delaware Amateur Racquetball Association (DARA) and was a member of DARA's inaugural Hall of Fame class in 1990. He remains a member of the DARA Board of Directors. For six years, he was an elected member of the United States Racquetball Board of Directors. In 2006, in ceremonies in Miami, Mas was inducted into the Cuban Sports Hall of Fame. He continues to be active in organizing tournaments in Delaware. 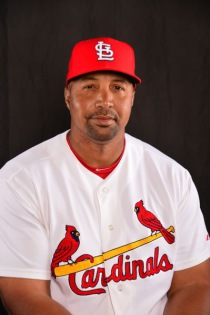 Derrick May was a three-sport star at Newark High School who parlayed his hitting skills into an 18-year professional baseball career that included 10 seasons in the major leagues. A first team All-State offensive end, May helped Newark win consecutive state football championships in 1984 and 1985. Derrick accepted a scholarship to play football and baseball at Virginia Tech before the Chicago Cubs made him a first-round draft selection - ninth overall - in 1986. May was an all-star in both the Carolina League and Southern League and reached the major leagues in September 1990. He became a regular outfielder for the Cubs in 1992-93-94. He also played significant time for both the Milwaukee Brewers and Houston Astros in 1995-96. He played for the Phillies in 1997, the Montreal Expos in 1998, and the Orioles in 1999. In 1993, he hit .295 with 10 homers, 25 doubles, 77 RBIs, 62 runs and 10 stolen bases in 128 games, and was named Delaware Athlete of the Year by the Delaware Sportswriters and Broadcasters Association. Over his major league career, May played in 797 games, with a .271 batting average, 52 home runs, 310 RBIs, a .319 on-base percentage; and .398 slugging average. He had over 2,387 plate appearances, a total exceeded by few Delaware high school graduates, among them his father, Dave May (DSMHOF 1984). May also played three seasons, 2001-03, in the Japanese League producing 59 homers and 234 RBIs. He is currently the hitting coordinator for the St. Louis Cardinals. 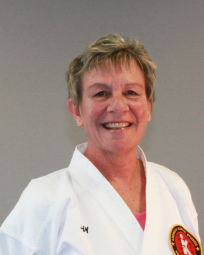 A nationally-recognized martial arts competitor and instructor, Judy O’Neill has the highest ranking in the martial arts among Delaware women and is one of the nation’s highest-ranked women. She coached two varsity sports at the University of Delaware and excelled in a third. She earned a First Degree Black Belt in 1978, currently holds a Seventh Degree Black Belt and has achieved a Second Degree Black Belt in Filipino Modern Arnis. During her 10-year tournament career in sparring and kata, 1975-84, she earned second place in 1978 and 1979 in the Martial Arts Rating System National Championships in the Women’s Black Belt Kata Division. She was inducted in 1991 to the World Martial Arts Hall of Fame, which named her Woman of the Year. In 1992 she was inducted into the Eastern USA Martial Arts Association Hall of Fame, which also selected her as its Woman of the Year. In 1979, she was recognized as National Wonder Woman of the Year by the National Organization for Women for community service. She helped develop the Dyna-Tots Program for preschool children and has conducted self-defense programs for women. She produced and starred in a weekly cable television show, American Karate, which aired locally for 10 years. At the University of Delaware, she scored four goals in a 1972 field hockey game to set a record that lasted 37 years. She coached the Blue Hens’ first varsity women’s lacrosse teams in 1978 and 1979 and, as women’s swimming coach those same years, led the Hens to 16th in the Eastern AIAW championships. She was the first woman to be inducted into the International Modern Arnis Foundation Black Belt Hall of Fame. 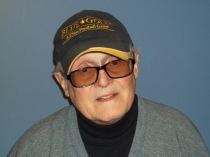 Frank Shea officiated football, basketball and softball in Delaware for more than a half-century. It was the late 1940s and Shea, a teenager, began officiating basketball games at the YMCA near his birthplace, Blackstone, Massachusetts. Some 50 years later, Shea would become the first recipient of a special whistle – The Frank Shea Gold Whistle Award. He received the award for his five decades of service to the Northern Delaware Football Officials Association. Shea refereed basketball in Delaware for 25 years, but football is where Shea made his mark. He stopped working on the field in 1997 and moved into the press box to become a timer, called “Dr. of Clockology” by his colleagues. In 2001 at age 72 Shea worked briefly as referee in the Blue-Gold All-Star football game, the 12th time that he had worked the classic. The next summer at the National Football Officials Association banquet, Shea was honored as the National Distinguished Official of the Year – the first Delaware official to receive the award. Shea was a charter member of the organizing committee when the Delaware high school football tournament began in 1971 and served on the committee for 36 years. Frank was on the field as an official in some of the early years of the state tournament. In 1982 Shea developed the officials’ association’s training materials and guidelines for rules and on-field mechanics, the bulk of which are still in place. 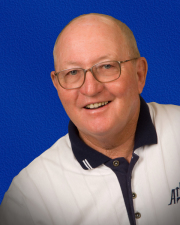 Ben Sirman was an all-state athlete, champion coach and long-time sports administrator at three high schools in Sussex County. At Laurel, he earned 10 varsity letters. In 1957 he was quarterback on Laurel’s unbeaten football team and was selected to play in the third annual Blue-Gold All-Star game. He was the starting quarterback for the Gold and would become the first former player to coach in the game when he returned in 1964. In basketball at Laurel in 1958, he averaged 21 points per game and was named first team All-State. At Swarthmore College, Sirman was a standout in football, basketball, and baseball. He returned to Sussex County in 1962. At Bridgeville, he coached two unbeaten football teams during a 23-game winning streak from 1966 to 1968. Ben was selected the state’s basketball coach of the year in 1968, when he led Bridgeville to a 19-1 record, losing only to state champion P. S. duPont. From 1972 to 1991, he was athletic director at Seaford. During that time Seaford teams won 99 conference or division titles and nine state championships. Sirman chaired the boys state basketball committee for 15 years. He was named Delaware athletic director of the year in 1991. Sirman's accolades also include: Delaware Football Coaches Association Award of Excellence in 1995; “Ben Sirman Night” recognition from his former Bridgeville players in 2003; inducted into the DIBCA Delaware Basketball Hall of Fame in 2005; and the Herm Reitzes Award from the Delaware Sportswriters and Broadcasters Association in 2009. Ben was inducted into the Delaware Afro-American Sports Hall of Fame in 2012, and into the Delaware “Legends” Basketball Hall of Fame in 2014. 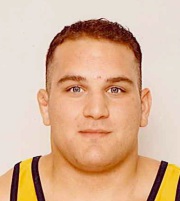 ﻿﻿John Testa was a football and wrestling star at St. Mark’s High School who became an All-American wrestler at Clarion University. As a St. Mark’s senior in 1997, Testa was the state’s lineman of the year and the defensive player of the year after earning all-state recognition for the second time. At the Blue-Gold game, he was named the game’s outstanding lineman and received the Jim Williams Award for his leadership. He was twice the state heavyweight champion and four times all-state. In his senior year at St. Mark’s, he was ranked second in the nation among heavyweights. As a senior at Clarion in 2003, he finished eighth in the heavyweight division of the Division I NCAA tournament to earn all-American status, defeating future Olympian Garrett Lowney of Minnesota. He was the first wrestler to win the Pennsylvania State Athletic Conference heavyweight championship four times. As a senior, he was named the outstanding wrestler in the conference tournament. Three times he was named the outstanding wrestler at Clarion, a traditional powerhouse in the sport. He won the Eastern Wrestling League heavyweight title three times and twice won the Penn State University Open and West Virginia University Open. In 2009 Testa was inducted into the Delaware Wrestling Alliance Hall of Fame.