Bernard ‘“Barney’” Briggs coached six sports during his 33-years as athletic director at Milford High School. Briggs promoted competition in new interscholastic sports and organized one of the state’s first athletic conferences. He was to Milford what Bob Dowd, Frank Coveleski and George Shollenberger were to Seaford, Rehoboth and Laurel. Following graduation from Penn State where he played football, Barney came to Milford in 1939 to coach football, basketball and baseball. His 1939 football team was not scored on until the season’s final game, finishing with a 7-1 record. The 1940 team recorded another 7-1 season, followed that year with 12 wins and two losses in basketball, and an 11-1 baseball record. Milford’s 1947 football team was the state’s highest-scoring team. Barney introduced track and field at Milford in 1946 and started the annual Milford Invitational Meet in 1950, an event that grew to become the largest downstate track competition. Between 1948 and 1962, he coached nine individual state champions and 1965 state champions in the 880 and mile relays. His 1964 track team won the conference championship meet. In 1963, Briggs led Milford’s new cross country team to its first winning season. Barney coached Milford’s first wrestling team in 1957 and J.V. teams in 1960-61. He organized the first Milford Invitational Wrestling Tournament in 1959. He was the primary organizer and founding executive secretary of the new Diamond State Conference in 1959-60. In 1975, the Milford High School Stadium was renamed the Bernard E. Briggs Stadium. 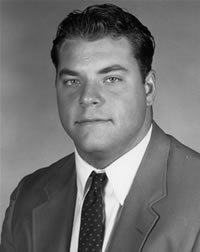 Jim Bundren was an All-Atlantic Coast Conference performer at Clemson University and played offensive guard for three National Football League teams from 1998 through 2002 before his career was cut short by a knee injury. Jim was a 1998 draft pick of the Miami Dolphins, but was claimed on waivers by the New York Jets, who went to the AFC title game that year against the Denver Broncos. He was then selected in the NFL expansion draft by the Cleveland Browns, and was later re-signed by the Dolphins before injuring his knee. At Clemson, Bundren was a four-year starter at left tackle for 47 games, a Tigers’ record. He was a second-team All-America pick by the Football News and a third-team All-America selection by the Associated Press and Sporting News. Jim was named to the 1996 and 1997 All-ACC football/academic teams, a distinction achieved by only one other Clemson football player. He was a four-time ACC Lineman of the Week selection, and started in three bowl games for the Tigers. Jim also was selected to play in the 1997 Blue-Gray All-Star football game. Before attending Clemson, Jim played football for one season at Valley Forge Military Academy, where he led the team in sacks, tackles and fumble recoveries. Bundren was a first-team All-Stater at A.I. DuPont High School and two-way starter in the Delaware Blue-Gold All-Star Football Game. In addition, he has been active in numerous community and volunteer efforts such as the Delaware Autism Society, Habitat for Humanity and NFL charity work. 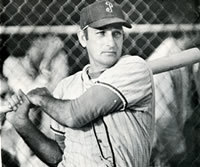 In 1990, Bob Immediato was saluted by the Wilmington City Council for a long and distinguished minor league and semipro baseball career. Immediato received a full-page News Journal tribute, in which columnist Matt Zabitka (DSMHOF '2000) wrote: “The likes of Bob Immediato will never again be seen in the Delaware Semi-Pro League….Bob Immediato is not a Small Wonder. He’s a Gigantic Wonder, to be admired, respected and remembered.” Bob played three years of minor league baseball in the Cleveland Indians organization. He was an All-Star selection his first year, moving up in class each year. Bob left pro baseball for personal reasons, but Cleveland held his contract for 10 years, giving him his unconditional release in 1972. Bob played in the Delaware Semi-Pro Baseball League for 34 years, retiring at age 56. He spent the last 27 years playing with Parkway’s perennial champions. He is the all-time Delaware Semi-Pro Baseball League leader in hits (923), RBI’s (551) and runs scored (515). He was the 1972 batting champion with a .450 average and was a six-time League All-Star. Bob was inducted into the Delaware Baseball Hall of Fame in 1996. While attending Goldey-Beacom College, in 1955 he set a school single-game basketball scoring record of 41 points. Bob was the Metropolitan League scoring champion 1960-1961, averaging 23 points per game. He was a basketball official for 32 years with IAABO Board #11, working at the high school/local college levels. Bob was a three-sport letterman at Wilmington High School (baseball, basketball, track). 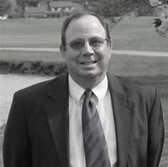 Rick McCall is head golf coach at Wesley College and golf pro emeritus at Maple Dale Country Club, from which he retired in 2005 after 40 years service. McCall’s Wesley teams have won seven conference championships. The 2000 Wolverine golfers were the first Wesley team to be invited to an   NCAA Division III championship tournament. Rick was named 2003 NCAA Division III golf Coach of the Year by Golf Week Magazine. Rick also coached the Maple Dale Junior Golf teams, which won the Delmarva Peninsula Championship 23 times in a 25-year span. As a coach and teacher, McCall has developed many outstanding young golfers. Many of them played for Dover High School, winner of 17 Delaware scholastic golf titles, which is believed to be a national record. McCall’s protégés include: Heather Bowie, winner of more than $2 million on the LPGA tour and a four-time college All-American; Canadian Tour pro Chris Wisler, a three-time All American at East Tennessee State University; Joey Maxon, touring pro and three-time All-American at Clemson University; and Chris Noll, the 2002 NCAA Division III national golf champion while at Wesley. McCall’s work with young golfers at Maple Dale earned a Philadelphia Golf Association citation as “the longest running and most successful Junior Golf program in Delaware history.” Rick organized several local golf tournaments, including the Dana Reed Memorial, the Fran Lore Better Ball Tournament, the Kent County Amateur Championship and the Kent County Open. He continues to provide free lessons for junior and senior golfers.

Lovett Purnell enjoyed a four-year National Football League career after achieving phenomenal athletic success at Seaford High School, Valley Forge Military Academy and West Virginia University. The highlight of Purnell’s NFL career was playing in the Super Bowl as a tight end with New England in 1997. He spent three years with the Patriots before being traded to Baltimore. Lovett was a four-year starter at Seaford in football, basketball and baseball. He was named first team All-State a total of five times in three major sports, and starred in the Delaware All-Star game in each sport. In football, Purnell led the state in scoring and was named the News Journal Player of the Year. In the Blue-Gold All-Star Football Game, he became the first player in history to win both major awards – The Jim Williams Sportsmanship Award and MVP. In basketball, he finished his career with 1,563 points, second only at Seaford to Delino DeShields. After a brilliant high school baseball career, he was drafted by the Chicago White Sox. Lovett chose to attend Valley Forge, where he was captain and MVP in all three sports and was inducted into the school’s Hall of Fame. At WVU, he was a football captain, and All Big East selection. Lovett led the team in receptions, setting a WVU single-season record for tight ends. Named the team MVP, he was also named to the WVU All-Century team. While playing in the Carquest Bowl, Lovett caught two touchdown passes.

Vinnie Scott was the second college football player in America to kick three field goals in a single game when he split the uprights from 38, 41 and 48 yards for the University of Maryland Terrapins in 1959. This was an Atlantic Coast Conference record that stood until 1979. Scott’s talented toe and aggressive play as a defensive halfback earned him a spot with the Baltimore Colts in 1961. However, the Colts traded him to the Washington Redskins and Vinnie accepted an offer to join the faculty and coaching staff at Salesianum School. It was the start of a Delaware scholastic coaching career that spanned 45 years. Vinnie was head basketball coach at Salesianum from 1964-1967; Conrad High School from 1969-1972; Glasgow High School from 1973-1979; and McKean High School from 1979-1980. He was head football coach at Delcastle High School from 1982 -1989 and St. Mark’s High School from 1991-2004. He led the Spartans to the Division I state finals in 1999, 2002 and 2003. Vinnie also served as an assistant coach in football and basketball at Salesianum, Conrad, Glasgow, Delcastle and St. Mark’s. He was head coach of the Salesianum swim team from 1961-1963, and head baseball coach there in 1967 after assisting from 1962-1966. Vinnie was named basketball Coach of the Year in 1972, and Blue Hen Football Conference Coach of the Year in 1987. Scott compiled a record of 83-49-2 in 13 years at St. Mark’s, where he was the longest serving head coach.

David Whitcraft was a four-year starter for the University of Delaware soccer team at goalkeeper and set Delaware records for most career shutouts (20), most career minutes played, most single game saves (17), most season saves (162), and most career saves (441). He allowed just 68 goals in 57 career games (1.19goals/game) and earned three "All Region" and three "All-East Coast Conference All-Star" selections (1982-1984). David was voted East Coast Conference (ECC) West "Player of the Year" (1983). He was a two-time third team All-American in NCAA Division I (1983 & 1984); the first UD player to play in the Senior Soccer Bowl (1984); and was named University of Delaware "Outstanding Senior Male Athlete" (1984-1985). David was a physical player who used both his size and wisdom of the game to dominate goal. In 1987 he became a teacher and the head soccer coach at Avon Grove High School. After a nine year absence from his playing days at Delaware, David captained the Delaware Wizards in their first professional season, starting 17 games and posting four shutouts. He was named a "Defensive Player of Week" in 1994, starting 14 games and posting two shutouts. Whitcraft led the Wizards to the playoffs in 1993 and 1994. He retired after the 1994 season to serve as assistant coach for the Wizards from 1995-1996. David is active in youth soccer in the Wilmington area and was inducted into the University of Delaware Athletic Hall of Fame in 2002.

Val Whiting played professional basketball in the United States and abroad after gaining All-American status at Stanford University and Ursuline Academy. In 2007 ESPN.com and the NCAA named Val as one of the Top 25 NCAA players of the past 25 years. After graduating from Stanford, Val played with the Viterbo, Italy team in 1994-95, spent the next season in Brazil, and then played three seasons in the American Basketball League with San Jose and Seattle. In 1999, Whiting was drafted by Detroit in the second round of the Women's National Basketball Association. She averaged 6.5 points and 6.7 rebounds in her first season, helping Detroit make the playoffs. Whiting was traded to the Minnesota Lynx in 2001 and retired after the 2002-2003 season. Whiting played her college basketball at Stanford, where she led the Cardinal to two NCAA championships. Val was a two-time All-American selection, Pacific Athletic Conference Player of the Year in 1990, and graduated as Stanford's all-time women's leading scorer and rebounder. She was inducted into the Stanford Athletic Hall of Fame in 2000, then the third woman to achieve this distinction. She was also a two-time participant in the U.S. Olympic Festival. At Ursuline Academy, Val led her team to four Delaware scholastic basketball titles and was a multi-year All-State performer.