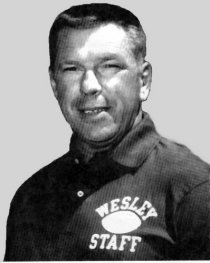 Bob began his career as head coach for varsity football and varsity baseball at Dover High School in 1959. He went undefeated in both sports in 1962. His teams won 29 straight games in baseball. He was head coach of the All-Star football game, winning games in 1962 and 1966. He was the first Gold team coach to win an All-Star game. In 1967 Bob was hired as the head football coach at Wesley College and won the Tri-State Conference championship his first two seasons. In 1970 he won his first Coastal Conference championship. Bob’s team won again in 1976 and appeared in the Sterling Silver Bowl in Hutchison, Kansas where the Wolverines ended the season as the second ranked Junior College football team in the nation. Bob was named Coastal Conference “Coach of the Year” in 1970 and 1976 and was three-time head coach of the Coastal Conference All-Star game. His record from 1967 through 1976 was 68-20-3. Bob coached until 1987 and ended with an overall record of 97-98-3. He led the conversion of Wesley College from a Junior College powerhouse to a four-year NCAA Division III football program. Bob returned to high school coaching at Cape Henlopen High School in 1989 as an assistant football coach. Bob coached freshman football at the University of Maryland for two years and as assistant football coach at Bainbridge Naval Center for one year. Coach Andrus’ legacy of excellence lives on today through the many players who have enjoyed highly successful careers. 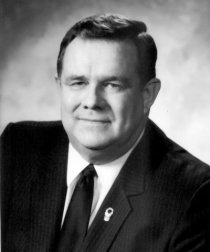 A 1956 Interscholastic Diving All-American, Bart was a three-year letterman on the P.S. DuPont High School swim team. Bart placed 1st in the Delaware State Meet in “Fancy Diving” and was a member of the shuttle-hurdle team that placed 1st in the Peninsula Relays. He was Delaware Interscholastic 1956 Diving Champion, setting a record three times in 1955. He served as Co-Captain that year and placed second in the 1955 Mid-Atlantic Swim Championship. Coach Bender is quoted as saying, “Bart is the best diver P.S. DuPont has ever had”. Bart also played guard at P.S. DuPont winning three football letters, and he started both ways in the 1956 All-Star Game. He was selected third team All-State in 1955. At West Chester University, Bart was runner-up in the Mid-Atlantic one-meter Diving Championship. As a private in the 2nd Army, and after a two year layoff, Bart was the one meter diving champion at a 1960 meet at Fort Knox. He gave exhibitions while touring with the USO in 1960 – 61. He served as Assistant Coach of the William Penn High School diving team. Bart was a Blue-Gold All-Star volunteer for more than 40 years. He was a 15 year softball umpire and served as Treasurer on the Delaware State Hall of Fame Board of Governors 1981-86. He was the 1984 “Lion of the Year” holding offices of District Governor, Charter Treasurer and Volunteer Trainer of leader dogs for the blind. 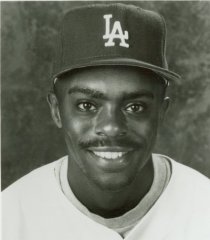 Delino DeShields started his thirteen year major league baseball career with Montreal at age 21. In his April 9, 1990 debut against the St. Louis Cardinals, he collected three singles, a double, scored two runs, an RBI and a stolen base. Only one other player has had four hits in his first major league game - Delawarean Spook Jacobs in 1954 with the Philadelphia A's. Delino's baseball career started in Seaford, first as a Little Leaguer, who led his team to two state titles and a Senior Little League World Series championship, then as a three sport first team All-Stater at Seaford High School. The Delaware State News named him Delaware Athlete of the Decade in 1989. Delino was offered a full basketball scholarship at Villanova University, but he chose to pursue baseball as the Montreal Expos' first round draft pick. Delino played with the Expos' Class A teams in 1987, then was promoted to Jacksonville, FL (AA) and finally Indianapolis, IN (AAA) by 1989 before moving up to Montreal in 1990. Delino played in 1615 games; he had 1548 hits, 872 runs scored, 561 RBIs and 463 stolen bases. His lifetime batting average with five teams was .268. Over his career, Delino played all seven field positions. He was traded by Montreal in a deal for LA's Pedro Martinez, and was selected Baltimore Orioles' MVP in 2000. He retired in 2002. 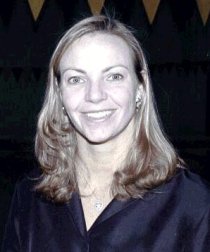 Barbara Harris qualified twice for the Olympic Games' women's swimming trials and earned honorable mention All-America at Northwestern University. She was a high school All-America at Mount Pleasant High School, where at age 17 she was the only Delaware female to swim in the Olympic trials. During her illustrious career at Northwestern, Barbara was a three-time Big Ten Conference backstroke champion and made the All-Big Ten women's swim team three consecutive years. In addition, Barbara qualified for the 1988 NCAA women's swimming championship in three individual and four relay events. She formerly held Northwestern women's swim records in two individual and four relay events. In one season at Northwestern, Barbara was named to the Big Ten and All-America women's All-Academic swim squads. In her senior year as a Wildcat, she was named the state's "Outstanding Female Swimmer" by the Illinois Swimming Association. Barbara excelled on the Mount Pleasant High School girls swim team, where she set three individual school records and two relay marks. Competing in the state championships, she set a University of Delaware pool record in the 100-meter backstroke - a record that endured for more than a dozen years. Barbara also was a double winner in the state women's swim championship as a senior at Mt. Pleasant and was named the school's outstanding scholar-athlete. In addition, she swam competitively for the Wilmington Aquatic Club. Barbara currently practices veterinary medicine in Delaware. 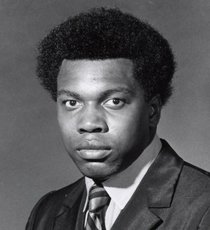 Regarded as one of the greatest defensive players in University of Delaware football history, Johnson enjoyed an All-America career at defensive tackle for the Blue Hens in 1970-72. Johnson helped Delaware win consecutive Small College national titles in 1971 and 1972 and three straight Lambert Cup trophies. As 1972 team captain of an undefeated 10-0 squad, Johnson earned All-America honors twice, was named All ECAC, played in two Boardwalk Bowls and was named to Delaware's All-Time team in 1989. He collected 215 career tackles at Delaware and played in the East-West Shrine Game. A 13th round draft pick by the Washington Redskins in 1973, Johnson was the first University of Delaware alumnus to start a game in the NFL. He replaced Verlon Biggs at defensive tackle for the Redskins in 1975. In his best season in 1976, Dennis recovered three fumbles, had 4 1/2 sacks and had a key interception to preserve a win against Dallas. He also returned an interception 57 yards the previous season. Dubbed by Howard Cosell as "the young Dennis Johnson" during his five NFL seasons with the Washington Redskins and Buffalo Bills, Johnson died in 1997 at the age of 46. 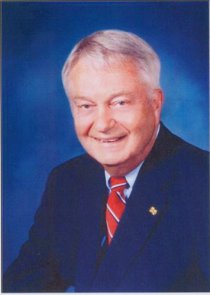 As Delaware's high school basketball scoring leader in 1948 and first-team All-State selection while starring for P.S. DuPont, Dick moved on to the University of Maryland, where he was a three-year starter for coach Bud Millikan. At Maryland, Koffenberger was the point guard who directed the Terps offense and defense according to former teammate Don Moran. While at College Park, Dick teamed with all-time Maryland greats Don Brawley and Gene Shue. Shue remembers Koffenberger as unselfish and an ultimate team player - a winner. Moran recalls Koffenberger as "our coach on the floor.a great competitor and knowledgeable basketball man." As a senior, Koffenberger served as captain of the Terrapins basketball squad. He was named to the Southern Conference All -Tournament team, helping the Terps to a first-round win over Clemson before bowing out to the nation's eighth-ranked North Carolina State Wolfpack. As a junior, Dick averaged 9.5 points on a team loaded with outstanding scorers. He led his team in field goal percentage (.480) and free throw percentage (.772) in his junior season. Koffenberger enjoyed success on the baseball diamond at Maryland, where he was a second baseman. After graduation Dick entered the U.S. Army. He played basketball on the Third Army team and was named Most Valuable Player in 1955. Following his Army service Dick returned to Wilmington, where he coached the Wilmington Jets professional basketball team during the 1957-58 season. 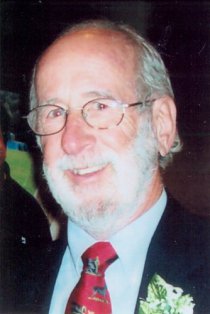 Len participated in four World Championship Hawaiian Ironman Triathlon competitions and four other Ironman events. He was one of only 50 men in his age bracket (65-69) still competing in the Ironman distance (swim 2.4 miles, bike 112 miles, run 26.2 miles). He began his triathlon career at the age of 51 and has completed more Ironman triathlons than any native Delawarean. In his age group, Len finished seventh in the New Zealand Ironman in 1996, ninth in the California Ironman in 2001 and earned fifth place in the Florida Ironman in 2001. Len completed 25 Half-Ironman triathlons (swim 1.2 miles, bike 56 miles and run 13.1 miles). He completed the Great Chesapeake Bay Swim (4.4 miles) and three full marathons. In 2002 and 2003, he completed the Ironman Florida, Backwater Eagleman Triathlon (second and sixth), Vineman Triathlon (fourth), Delaware Half  Ironman (first), Columbia Triathlon (second), Escape From Fort Delaware (first), Rehoboth Biathlon (first twice) and several sprint triathlons with three first place finishes. In the past 15 years, he has raised about $150,000 for Special Olympics Delaware through his participation in endurance competition. Len served as Special Olympics coach in several sports nationally and in Delaware. Len was selected 1997 Special Olympics Delaware Volunteer of the Year and is a member of that organization’s Hall of Fame. 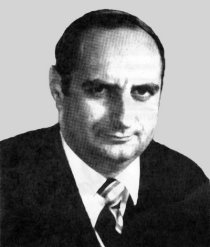 James ‘Jim’ Wentworth served as head basketball coach at Wesley College for 40 years winning 502 games. During this period he also coached baseball two years, track two years and football as assistant five years. He was Wesley's Athletic Director 11 years. Ninety per cent of his athletes were awarded degrees from the college. Jim played a key role in Wesley's athletic growth process, establishing Wesley as a Junior College basketball powerhouse, (five-year record 114-27), then establishing the school's solid Division III program. : Jim's 1965-66 squad was the most successful in Wesley men's basketball history. That team finished 24-3 and was ranked 10th among the nation's junior colleges. In Division III, his team won the Wild Goose Classic Tournament 1986-87 at Washington College and the Eastern States Athletic Conference Tournament 1986-87 and 1987-88. Jim's coaching legacy includes mentoring and molding young men. Ten of his players went on to coach college level and nine went on to coach at high schools. Jim received an honorary doctorate from Wesley in 1999, one of only 23 persons so honored at Wesley. Other honors he received were: Wesley Professor Emeritus; the Athletic Hall of Fame at Wesley College and Pfeiffer University, his alma mater; and the Wesley College gymnasium is named "Jim and Shirley Wentworth Gymnasium". Jim received the Lower Delaware Gridiron Club President's Award of Excellence in 2002. He received the National Association of Basketball Coaches Outstanding Service Award for Division III. He received Wesley College President's Award for Excellence and Performance and a Doctorate of Public Service in 1999. 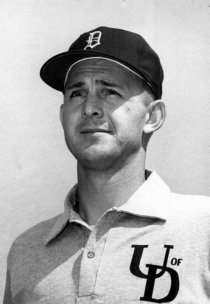 Wiz was the architect of powerhouse offensive lines that paved the way for the University of Delaware football team's rise to perennial national championship contenders during the Wing-T era under head coaches David M. Nelson and Harold R. "Tubby" Raymond. As Blue Hen offensive line coach from 1952 through 1976, Irv helped to develop numerous Blue Hens who attained All-America status and was instrumental in recruiting top-quality talent for the Delaware football program. He also contributed sections to Nelson's nationally acclaimed book, "The Delaware Wing-T." As head basketball coach at the University of Delaware from 1954 through 1966, Irv ranks second on the school's all-time career victory list with 111. His 1961-62 Blue Hen squad compiled an 18-5 record. Wiz also authored two editions of the book, "Delaware Basketball." In addition, he served as an advisor to Poland's Olympic basketball team in 1965 and 1966. He also coached American women's basketball teams and USA junior teams in international competition. During his tenure as an associate professor at UD from 1952 through 1989, Irv served as head Blue Hen golf coach from 1955 through 1963. As a college athlete, Wiz played on two national championship football teams at the University of Michigan and caught a touchdown pass in the Wolverines' 1948 win over Michigan State. He was also a member of Michigan's 1948 Big 10 basketball champions. Wiz has been active in community sports programs for decades, and was elected to the UD Athletic Hall of Fame in 2000.