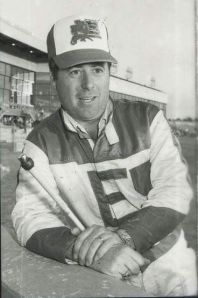 His name is synonymous world-wide with harness racing..Davis was a life-long Smyrna, Delaware resident who had an outstanding career for more than 30 years as a driver and trainer..He is the oldest full-time major trainer-driver in the sport..Davis ranks in the upper 1% among peers in the sport’s history..Davis is Delaware’s all-time winning harness driver with over 7,200 races, winning 5,000 more than the next highest Delaware driver..He is ranked as the l0th all-time winning driver with 404 wins and in 1983 with 470 wins..He is Delaware’s all-time winning driver (over $37 million) and ranks 20th all-time in money-winnings..On three occasions, Davis won more than $2 million a year; and in 19 seasons, won over $1 million..He is the first Delaware resident to win more than $1.1 million in one meet (accomplished twice recently at Dover Downs)..He was honored by the Delaware Standardbred Owners’ Association with its first “Lifetime Achievement Award”. 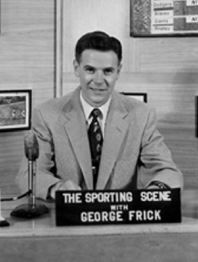 A longtime sports broadcast and writing personality, George was the first sports director of Channel 7, WDEL-TV. He was a 42-year member of the  Delaware Sportswriters and Broadcasters Association, serving as President in 1953-54. He served as the public address announcer for University of Delaware football, the Blue-Gold football game, Wilmington Blue Bombers basketball in the 1950's, Caesar Rodney High School basketball games and Kennett Square boxing cards. He narrated play-by-play on weekly films of University of Delaware football from 1951-54. George received acclaim as the color commentator and interviewer for “Harness Racing from Brandywine” from 1952-54. He hosted “The Sporting Scene”, named “Best Sports Show in Delaware” three  years by the Wilmington Sunday Star newspaper and named the “Best New TV Sports Show in Delaware Valley” by TV Guide in 1951. George co-hosted with Dave Nelson the 1954 Refrigerator Bowl football game .  George was a board member for the Blue-Gold football game in the 1950's & 1960”s. He was the public relations director of the Delaware Tennis Association in the 1960”s. George broadcast  Dover High School. sports on WDOV from 1971-76.He was the LPGA Championship (McDonald Classic) announcer 1987-1998..George was on the DSMHOF Board of Governors (1985-99) and President (1996-97)..He was also a frequent master of ceremonies at Delaware sports banquets.. George wrote  “Frick’s Picks” since 1994..He received the “Herm Reitzes" , “Pat Knight”, “Paul Harris Fellow”, 1964 Wilmington Optomist Club “Optomist of Year” and “Distinguished Volunteer” awards. 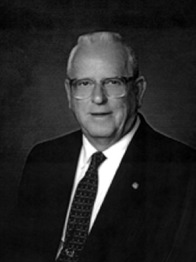 Melvin was a giant in stock car racing..He was a pioneer in the formation of NASCAR , bringing it to Delaware in 1949. He designed and built Delaware Speedway in 1949 running sanctioned NASCAR events there. In 1969, Joseph designed and built the famous “Monster Mile” at Dover Downs, with Ralph Moody. He brought the “Winston Cup Series” to Dover..Joseph gave the “Gentlemen, start your engines” announcement at every Dover Downs NASCAR race since 1969. His number 49 car became legendary. Joseph's first car was a 1937 Ford Coupe. His 1940 car won the 125 Modified Sportsman race on a 4.1 mile beach course in 1955 with a winning speed over 100 mph.  His cars beat such top stars as the Allisons, Unsers and Pettys..He won two races (Sportsman Division & Modified Class) in the same car on the same day. His new class (Grand American) race cars, driven by Bobby Allison, David Pearson and Tiny Land won six televised events inthe 1970s. One of his cars still holds the track record at Talladega..Joseph pioneered the use of concrete in 1994 as a track surface at Dover Downs..He opened the new Nashville Superspeedway in 2001 with a sold-out Busch series NASCAR race..Joseph also co-owned several top horses..He built a state-of-the-art harness horse training facility in Georgetown in 1960. Joseph was instrumental in the success of the Delaware State Police Youth Camp (Camp Barnes), sponsoring a car race, which annually contributes $30,000 to Camp Barnes..He was presented Badge #49 by the state police for his contributions. 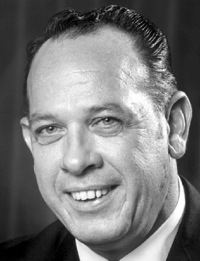 Kane was an accomplished basketball and football official and considered by many officials, coaches, players and fans, as one of very best to come out of Delaware. He officiated more than 2,500 basketball games (1948-73). Kane officiated high school games as a member of IAABO Board #11..He officiated seven consecutive high school state tournaments including the first-ever in 1967. His last high school tournament was the 1972 semi-final game at the University of Delaware Field House..He served on the high school state tournament committee for six years (1969-74)..Kane served as IAABO Board #11 President for three terms (six years)..He officiated college basketball games for several years with CBOA beginning 1960-61..he was approved in 1957 to officiate in the Eastern Professional Basketball League for five years..Kane was selected to officiate the Eastern Professional Basketball League All-Star game in 1958 in Wilkes-Barre, Pennsylvania. Based on his All-Star game performance and his performance in an NBA game between the Philadlephia Warriors and Syracuse Nationals, he was selected to officiate in the NBA. Kane officiated high school football games 33 years (1948-81), working in the referee position 25 of those years..He was honored by the New Castle County Football Officials Association for his years of service while serving as Association President one year and game assignor nine years. He was the referee for two football state tournament games, including the 1974 championship game. Kane officiated the first Blue-Gold football game in 1956 and several others..He was the Assistant Director of Athletics at Delaware Park for more than 15 years and was a boxing referee in the program. 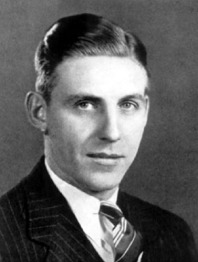 A legendary high school football coach, McCall played football and basketball at Salesianum High School (1921-24).  He was all-Maryland in football and basketball at Mount St. Mary’s College in Emmittsburg, Maryland.  McCall coached high school football from 1932-39, while working the midnight to eight shift at the DuPont Experimental Station during football season.. He was the first “non-teacher” coach Salesianum ever had. His overall record of 41 wins, 18 losses and four ties were against the much larger schools in the Philadelphia Catholic league, all of which were very formidable opponents and considered “impossible to beat”. During the 1935 season his team of only 13 players was Co-Champion of the Philadelphia Catholic League.  Vince Lombardi, while playing for the Wilmington Clippers, was his assistant coach for one season, and famous Salesianum football coach, Dim Montero, was one of his players. Some of the players he coached were Quack Carucci, Dim Montero, Rex Gardecki and Coggy Colleens. 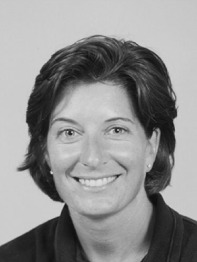 Missy was an outstanding field hockey and lacrosse player and coach. At the University of Delaware, she was named “Outstanding Senior Female Athlete of the Year” in 1985 after four years of outstanding play in both sports. Her career totals in lacrosse are 227 goals, second all-time at Delaware, 58 assists (eighth) and 285 points (second)..Her lacrosse team won the l982 AIAW title and NCAA national title in l983..The team won the 1984 East Coast Conference title and placed third in the NCAA national tournament..The team’s four-year record was 56-15. She co-captained the l985 team.  In field hockey, the team made the EAIAW Regionals in 1981, was ECC Champ and NCAA third place in 1982 and ECC Champ again in 1983 and 1984. Meharg co-captained the 1984 team, was ECC “Player of the Year” in field hockey (1983) and lacrosse (1984). She played seven years with the U.S. national field hockey team..Following her Delaware career, she was head coach of the University of Maryland field hockey team that won the 1993 and 1999 NCAA titles. She was NCAA Field Hockey “National Coach of the Year” in 1991 and 1993. 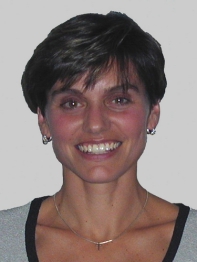 Vicki was an Olympic runner with a stellar high school and college career. At Concord High School, she won five state titles. She was the state record holder (twice) in the 800 meters and 1600 meters.  Vicki was state champion at 800 meters (1983 & 1984) and 1600 meters (1985). At the Penn Relays, she placed second in 1984 and third in 1985 at 1500 meters. Vicki was first team All-State in field hockey as well. At Villanova University, she was an eight-time NCAA Champion (once in Cross Country, four times in Indoor Track and three times in Outdoor Track). She was the NCAA record holder at 3000 meters. Vicki was an Academic All-American in track, the NCAA Track and Field “Athlete of the Year” in 1988-89 and 1989-90. She won the “Jumbo Elliott” award twice. Vicki also won the Honda-Broderick award. In the 1988 Olympics, she placed sixth in the 3000 meter finals. Vicki represented the United States in 1996 in the 1500 meters. In the World Cross Country Championships, she placed fourth (team placed 2nd). Vicki held the American record for 5K on roads. She was inducted into Delaware Track & Field Hall of Fame 2001. 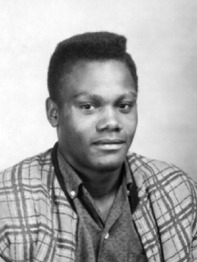 Harold was a track and field star for Claymont High School in the mid 1950's.  He broad-jumped 22’1/4” in his first varsity meet as a 14-year old, 7th grader.  He later jumped 22”8 ½” to share the state record.  Trotter also shared the 100-yard dash record of 9.9 seconds and set the 220 record of 21.6 that still stands.  He scored 43 points in four years in the Delaware Interscholastic track championships.  Trotter won 28 straight dashes for Claymont High School..He was chosen third team All-State halfback in football and led New Castle County in scoring with 88 points.  He scored 42 touchdowns in three seasons.  He also lettered in basketball and played baseball for Claymont High Schoo.  He was inducted into the Delaware Track and Field Hall of Fame in l996.