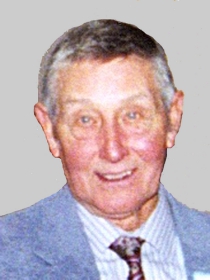 Bunny Blaney was considered one of Delaware's all-time schoolboy athletes. He was All-State at Newark High School, both in football and basketball. He led the State in basketball scoring two seasons with 509 and 614 points and set a career record of 1,415 points. He tied the State's 100-yard dash record, lettered in baseball and was 1951 Delaware "Athlete of the Year". He also excelled in football at Duke University.   He set an Atlantic Coast Conference football record converting 10 of 11 PATs. He also set or figured in two Duke University records, one as a receiver in a 75-yard pass play from Sunny Jurgensen in 1955 and the other, a 97-yard touchdown run back of a kick-off, both against the University of Pittsburgh in 1956. 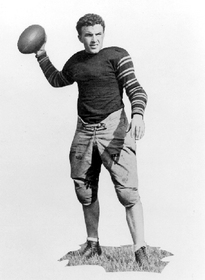 Chalmers was considered one of Delaware's All-time schoolboy athletes of his era (1920s) while at Newark High School. Chalmers was the last athlete to win nine varsity letters at the University of Maryland, three each in football, basketball and baseball. He scored 54 points in a football game against Smyrna in 1925. At the University of Maryland, he was a football running back who also did the passing and punting. He played pro football with the Washington Capitols and the Shenandoah, Pa. Club. 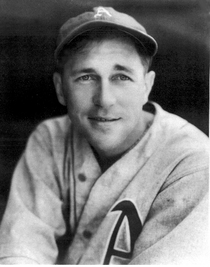 Eddie was an outstanding shortstop with such local clubs as Defiance AC, Brownstown AC and Wilmington AC. He had a 10-year career in minor league baseball.. He was signed by the Philadelphia Athletics at age 23. Eddie broke in with Harrisburg in 1931 and played his last three years with the Los Angeles Angels of the Pacific Coast League. Eddie was a clutch hitter and superb fielder. With the Angels in 1939 he had one of his best seasons, hitting .280, leading the league shortstops in fielding, and was chosen team MVP. He hit .305 with Birmingham of the Southern Association in 1937. On the last day of the season (double-header) he went 9 for 11 with seven doubles, one home run and one single. 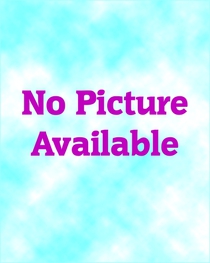 A storied Wilmington sandlot athlete, Matt earned 13 varsity letters over three years in football, basketball and baseball. In baseball's minor leagues he had a 10-year career, with a batting average well over .300, breaking in with Rochester of the International League in 1919. In the 1921 Little World Series he was 7 for 10 for Baltimore against Louisille, setting a series record. In football, Matt kicked four field goals in a 12-9 victory for Flint, Michigan in a professional game. 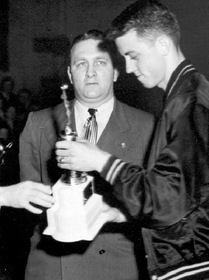 Honored for his administrative and promotional efforts in lower Delaware,  he was a sportscaster and correspondent; and Executive Secretary from 1950 to 1974 for the Henlopen  Conference. Pat was also Sports Information Director for Wesley College. He started "Little League" baseball in lower Delaware (Dover - 1955) and was largely instrumental in forming 18 Little League baseball programs. He was once President of Wilmington Sportswriters and Broadcasters Association. Pat won the International "Little League Baseball Service" award in 1973. 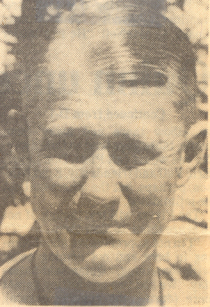 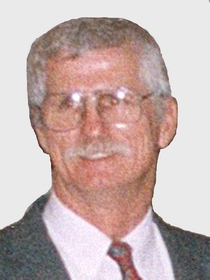 He didn't go out for sports at Wilmington High--didn't even graduate--but Bill became a blue-collar hero as a World Class javelin thrower. He left school in 1957 to join the Navy--where he received his equivalent diploma--and came home to a job as a sheet-metal worker. At age 22, he threw his first javelin on a dare and days later, won the Middle Atlantic AAU title. Married and a father---he became a vintage freshman at the University of Tennessee and as a 30-year-old junior, won the AAU, NCAA and USTTF championships and defeated the Olympic champion in a dual meet vs. Russia. His career best was 291 ft., 9 1/2 inches in a meet in Germany. Bill was the cover boy on the 1971 NCAA Track and Field Guide. He graduated with a 3.0 average.