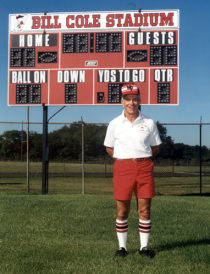 Cole was an all-around athlete at P.S. DuPont High School and the University of Delaware. His mercurial ball carrying helped the Blue Hens win 32 straight games in the 1940s. At the University of Delaware he won 11 letters in football, baseball and basketball. He received "Little All-American" football honors in 1948. Billy was one of the States premier High School football coaches at William Penn High School. In 25 years his teams compiled a 148-71-10 record and had four undefeated seasons. He was elected 1962 "State Coach of the Year", although he was accorded the mythical title several times in the 1950s. From 1952 to 1956 he only lost two of 47 games. He had an unbeaten streak of 23 games. He was the winning coach of the first Delaware Blue/Gold All-Star game in 1956. Billy coached basketball five years and baseball 12 years. He later served as an assistant to one of his former players, a Cole favorite, Bruce Reynolds, heir to the "Kings" dynasty. 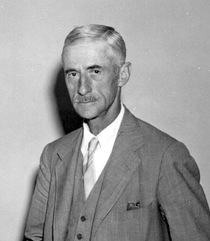 An authority on the construction of race tracks, DuPont also was prominent in breeding and racing thoroughbreds. He had five starters in the Kentucky Derby. His horse "Parlo" was voted National three-year old "Filly of the Year" in 1940 and his horse "Berlo" received the same honor in 1960. He designed Delaware Park and his own National Cup Course at Fair Hil, Maryland. He authored the state's racing bill and was a co-founder at Delaware Park, continuing as a director until his death. He encouraged the construction of many tennis courts in the State and the city of Wilmington, its first two all-weather courts at Haynes Park in 1947. DuPont donated to Wilmington much of the old Wilmington CVC golf course now known as Porky Oliver Golf Club. He was a Delaware Lawn Tennis Association President and in 1957, he received the "Laymon Honor" award of the Delaware Association of Health, Physical Education and Recreation for contributing to the growth of tennis in the state. 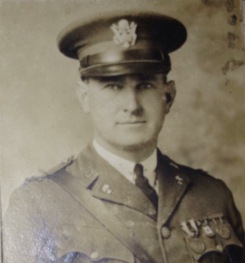 By age 22, Cap was a State champion and the National Guard persuaded him to join the organization and teach marksmanship. An Olympian in 1924, Cap was an All-American trapshooter three successive years, 1936 to 1938. At the year of his induction, Grier was considered the most outstanding target shooter Delaware ever produced, and he may still be so considered. In 1938, be won the Grand National Championship and also was the top professional in  doubles. 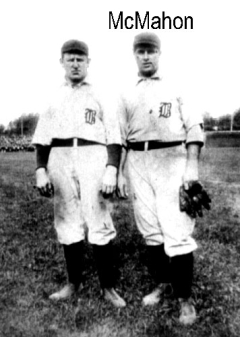 This Wilmington man was an outstanding pitcher with the old Baltimore Orioles. In 1880, pitching for both the Orioles and the Philadelphia Athletics, he won a league-leading 36 games in the major league American Association. With the Orioles the next season, he again led the league in wins with 35. In both seasons, McMahon was the league leader in complete games and innings pitched. He was a member of the 1894 Orioles that is rated one of great teams of all time. He beat Cy Young of Cleveland, 2-1 , for the win that clinched the pennant. His nine-year record in the majors was 174-127. He was born Sept. 9, 1867 and died Feb. 20, 1954 at age 86. 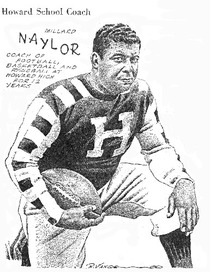 Naylor was Howard High School's head footbalI coach for 32 years, the only one the school had until he retired in 1957. He left behind a record of 132-91-24 and a legacy of outstanding players. Naylor coached 22 teams that finished above .500, and two were undefeated and won six titles. His 1933 Wildcats won the South Atlantic Conference championshiip and the 1939, 1940 and 1941 teams won the conference's Northern Division. His 1948 team won the mythical City championship and the 1952 team won the mythical City and County titles.. From 1926 through 1939, he coached without pay--including hitches with the baseball and basketball teams. After leaving the football post, he taught and served as Athletic Director for three more years. He died at age 77 on April 16, 1979, the day he was elected to the Delaware Sports Museum Hall of Fame. 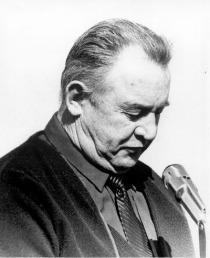 Another veteran of the high school football coaching ranks, Schollenberger guided Laurel High School for 36 years (1935-1965). He arrived in 1930 in the era of one-man coaching staffs. He had five undefeated teams and was state "Coach of the Year" in 1957. His 1937 team scored 222 points and allowed only 12. George also coached baseball and basketball.   His girls' basketball team won the state championship in the early 1930s and his boys' basketball team, in one five-year stretch, lost only three games. 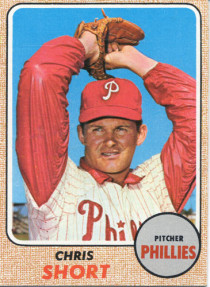 A former Lewes High School athlete, Chris pitched in the major leagues 15 years. He was Delaware's outstanding modern-day baseball pro. In a 13-year pitching career with the Philadelphia Phillies, he won 132 games and lost 127 and was a 20-game winner in 1966. He pitched in two major league All-Star games (1964 & 1967),  and was a three-time Wilmington Sportswriters and Broadcasters Association's Delaware "Athlete of the Year" (1962,65 & 67). In 1964, because of injuries to three other starting pitchers, along with Jim Bunning, he started 10 of the last 15 games of the season.